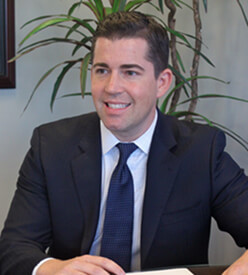 Noah’s expertise in financial planning and investment management provides his clients with tailored guidance and customized strategies, with an emphasis on comprehensive wealth management. As a Registered Principal his responsibilities include management of operations and compliance for Kendrick Wealth Management.

Noah began his career earlier than most, having earned his securities license while still in college. Prior to establishing Kendrick Wealth Management, Noah spent 10 years as an advisor with Edward D. Jones & Co., where he became a limited partner of the firm. Noah is a graduate of the University of Akron, having earned a bachelor’s degree in business management followed by a graduate certification in financial planning from New York University. Noah has earned the prestigious CFP® certification, one of the most respected financial planning credentials among consumers and the recognized standard of excellence in personal financial planning.

Noah and his wife Meghan, live in Cave Creek, Arizona, with their two children, Tyler and Sydney, and the family dog, a golden retriever named Josie. Active in the community, Noah has served in various leadership roles, including president of the board of directors for the Carefree Cave Creek Chamber of Commerce, and as a member of the executive board for the Foothills Community Foundation. When not in the office, Noah enjoys time with his family, golf, and most anything outdoors.

Raymond James is not affiliated with any organizations mentioned.

A published profile on Noah Kendrick and Kendrick Wealth Management

in the U.S., which it awards to individuals who successfully complete CFP Board’s initial and ongoing certification requirements.

Raymond James financial advisors may only conduct business with residents of the states and/or jurisdictions for which they are properly registered. Therefore, a response to a request for information may be delayed. Please note that not all of the investments and services mentioned are available in every state. Investors outside of the United States are subject to securities and tax regulations within their applicable jurisdictions that are not addressed on this site. Contact our office for information and availability. © Raymond James Financial Services, Inc., member FINRA/SIPC | Legal Disclosures   |   Privacy Policy   |   Terms of Use